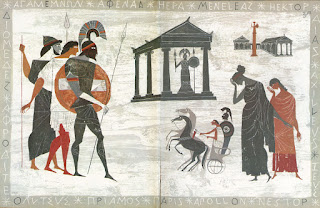 For the 17th consecutive year the Folktales’ Festival of Kea contributes, with fervour and passion, to the dissemination of oral tradition and of the art of storytelling in Greece and abroad. This year’s Folkstales’ Festival will be held on Kea Island from July 27 to August 4, 2019 and its central theme is “Greek Mythology”. Storytellers and musicians from all over Greece, as well as from Korea, the UK, Norway and Iran will join us on Kea to tell myths and mythology-based stories in venues all around the island. At the same time, the Festival features training courses for children and adults. 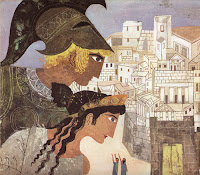 This years’ Festival will begin with one of the masterpieces of world literature, Homer’s Iliad, told by Aggeliki Ghogou and Smaragda Apostolatou. For those looking for something more contemporary than Homer, Anthi Thanou and the musician Alexandros Makris, inspired by the work of the author Nikos Tsiforos, will tell us stories of Gods living as humans. All the above will happen on Saturday evening, while on Sunday morning, at the Archaeological Museum of Kea, Anthi will celebrate with an olive branch the eternal glory of the Olympic Games winners. Stella Kasimati will take the lead to give us too much of a good thing, taking us on a delightful exploration of the timeless secrets and wisdom of the ancient Greek myths. And, since one never gets enough of the good things in life, Stella will bring us closer to Dionysus, the God of Fullness and Abundance of Life. 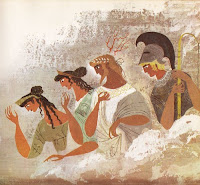 Ilias Giannikopoulos will tell the story of Prometheus, the hero who chose to fight with the supreme power in order to serve man. Smaragda Apostolatou will accompany his telling with music and sound effects. Vasilia Vaxevani will retrace the life and feats of Theseus, the mythical King of Athens, in a masterful combination of storytelling and the art of comics. Filia Dendrinou will tell us about Persephone on her way to join Hades, 75 meters underground, at the quarry of Orcos while Eleana Hatzaki will take us to the Heavens to acquaint us with the constellations of the zodiac. Deep into the oak forest we shall listen to the Norwegian soprano, Kristin Groven Holmboe, sing opera songs and airs in company of the Hamadryads. We shall help Lila Theologia Pitta, Voula Manousaridou, Anezoula Katsibiri and the musician, Ilias Papiotis to disentangle for Athena’s spider web, escape the Nymphs’ dance and avoid biting the apple of Discord. God willing, we shall travel to Korea to meet the storyteller, Seung Ah Eunae Kim and the musician, Hee Young Kim. The team from Korea will tell the myth of “Bari, the abandoned princess”. Moreover, they will give a special lecture concert in English on “Arirang”, the best-known and most popular Korean folk song, considered as the cornerstone of Korean culture. 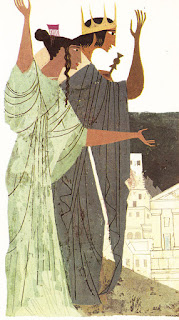 On our return we shall meet Digenis Akritas on threshing floors made of marble, a story told by Smaragda Apostolatou, accompanied by the musician Solis Barki. Later, Maria Vrachionidou, with her myths about the Gods of the Sea, will take us on a ride with Poseidon’s chariot.
Nothing is over till is over, as the saying goes, and Giorgos Evgenikos will remind us that we should “Call no man happy, till he dies” at the Ancient Theatre of Karthea, with the story of Solon and Croesus as recorded for all eternity by Herodotus. The Persian storyteller Amir Mirzai will tell a version of the same story in Farsi, while Solis Barki will accompany the tellers with music and sounds.
The last, but not least, morning of the Festival will be dominated by the story of Hercules told by Amanda Gerarchaki and the musician Natasha Tapaki. We shall follow his adventures and get to know him through his feats. This will bring us to the ninth and final evening of the 17th Folktales’ Festival and the setting sun will deliver his crown to the teller Virginia Kokkinou. She will, of course, put it on and take us together with the musicians Giannis Anthopoulos and Emmanuel Paliakis along the paths of Dionysus, where after the stories we shall sing, drink wine and be merry.

That’s the end. See you all next year! 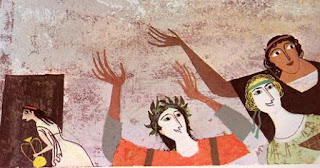 The 17th Folktales’ Festival is co-organised by the Centre for the Study and Dissemination of Myths and Folktales, the Municipality of Kea Island and the Region of Southern Aegean. The event is also supported by the Cyclades Ephorate of Antiquities and the Arts Council Korea.

The art director of the Festival is Giorgos Evgenikos.